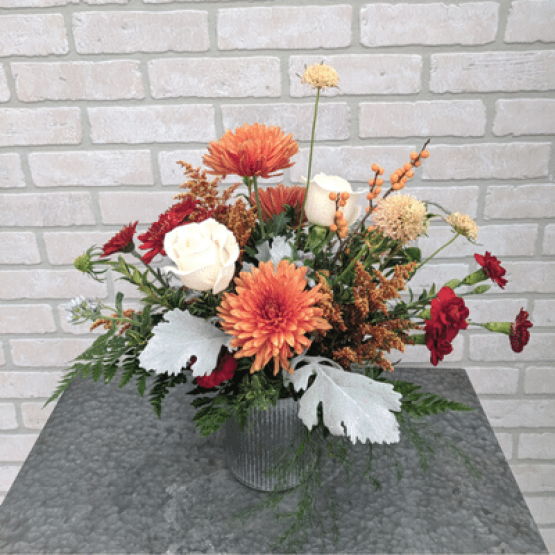 Our gorgeous Fall flower arrangement  named Autumn Hope is our Charity in Bloom design of the season. 25% of each sale of this arrangement will be donated to The Falls Cancer Club.

This non-profit organization is 100% volunteer run and all money raised is used to assist Cuyahoga Falls resident who have cancer. For more information check out this great article:

By Eric Poston on Akron.com

CUYAHOGA FALLS — For more than 70 years, the Falls Cancer Club has been helping Cuyahoga Falls residents with cancer.Gertrude Moore, Dixie Freeman and Genevieve Gitzinger organized the club, a 501(c)(3) nonprofit organization, in March 1948, according to Bonnie Severt, who has been the publicity chair for the club for the past two years. She said the club bylaws were drafted in December 1948 and the club was incorporated in 1951.To receive assistance from the club, someone must live in Cuyahoga Falls and have cancer, Severt said. The club will help a patient with up to $400 per month in prescription medications, up to $100 per month in nutritional supplements and up to $100 per month for medical equipment.Financial assistance also is offered for the payment of cancer-related bills such as doctor, hospital, lab and treatment bills, Severt said.“Only bills that have been accrued after they become a patient will be considered for payment by the club and will be paid in full if they are under $200 or in payments if the bill is over $200,” Severt said.She said patient names are confidential and once a person becomes a patient, they are given a number and a visitor is assigned. The visitor is in touch with a patient once a month and is their liaison for any support the club provides.Currently, there are 85 active members in the club.“Anyone can become a member of the Falls Cancer Club,” Severt said. “Once a member, they must participate in at least five meetings and/or events a year to maintain their active status.”Severt said she became a member of the club in 1986.“My sister-in-law’s mother had passed away from cancer and the family had asked for memorials be sent to the Falls Cancer Club,” Severt said.Severt said she had never heard of the organization at the time and asked for information. She said the club helped pay for cancer-related bills for her sister-in-law’s mother.“I had [also] lost my first husband to Hodgkin’s lymphoma and was well aware of the devastating effects of the disease on a family, as well as the financial hardships associated with a cancer diagnosis and treatment,” Severt said.Over the years, Severt has held various positions on the club’s board, including recording secretary, vice president and president for four years. She has chaired various fundraising events, such as Mardi Gras dinners, road rallies, quilt raffles and the Battle of the Badges event for eight of its nine years.Various fundraisers occur throughout the year to raise money to pay for cancer patients’ bills. Some of the current events include the Battle of the Badges, a Reverse Raffle, Card Party, Great Falls Patriot Run, Power of the Purse Bingo, Night at the Races, Dinner/Dance and Cookie Walk. Severt said the Reverse Raffle this year had to be postponed because of COVID-19 but will be rescheduled for later this year.The Falls Cancer Club is planning a virtual walk May 15-17 to help raise money for the club, with participants walking on any of those days and at any time. A $20 donation per person to participate is requested. To register or for more information, call 330-929-2796 or 330-687-9253 or email fallscancerclubinc@gmail.com.Severt said the police and fire departments in Cuyahoga Falls have been supportive of the club, playing a competitive basketball game, the Battle of the Badges, for the past nine years and raising over $66,000 for the club. Also, she said other organizations, such as the Eagles, have supported the club.In addition, the City of Cuyahoga Falls showed its support in March 2018 when the club was presented with the Honorary Boulevard Street Naming Award, she said.“Mayor Don Walters supports and recommends the club to various companies and organizations throughout the city and is available to listen, advise and support us when we need him,” Severt said.The community can help support the club by sending a donation, making a memorial in the name of a loved one, attending a fundraiser or joining as a member.“Our patients have bills and we want to help them, so any financial assistance we receive goes directly to their needs,” Severt said.She said the club’s president, Melinda Dull, would like to hear from anyone interested in becoming a member or needing help, or who would like to make a donation or memorial gift.“Since the club’s inception, we have helped over 1,300 residents of Cuyahoga Falls who have cancer,” Severt said. “Knowing that we are alleviating some of the burdens and stresses for these cancer patients so they can concentrate on their health is probably the most rewarding aspect of being a part of this organization.”She said the group is an all-volunteer organization and 100 percent of the donations go directly to support the club’s patients.“We have very little overhead and no paid employees,” Severt said. “Everyone who is a part of this organization works very hard, donates a lot of their time, talent and treasure to ensure that our patients can continue to rely on the Falls Cancer Club to help them while they are battling cancer.”The club usually meets on the first Thursday of each month at 7 p.m. at the Church in The Falls, 837 Chestnut Blvd., but hasn’t been meeting recently due to the COVID-19 pandemic.To contact the club, call 330-929-2796, email fallscancerclubinc@gmail.com, or mail Falls Cancer Club Inc., P.O. Box 3244, Cuyahoga Falls, OH 44223. The club also can be contacted through its Facebook page.

We are committed to delivering your gift on time and as fresh and beautiful as possible.

Due to nature, seasonality, and regional availability of flowers, it is sometimes necessary to make substitutions of equal or greater value. We reserve the right to substitute vases and baskets.